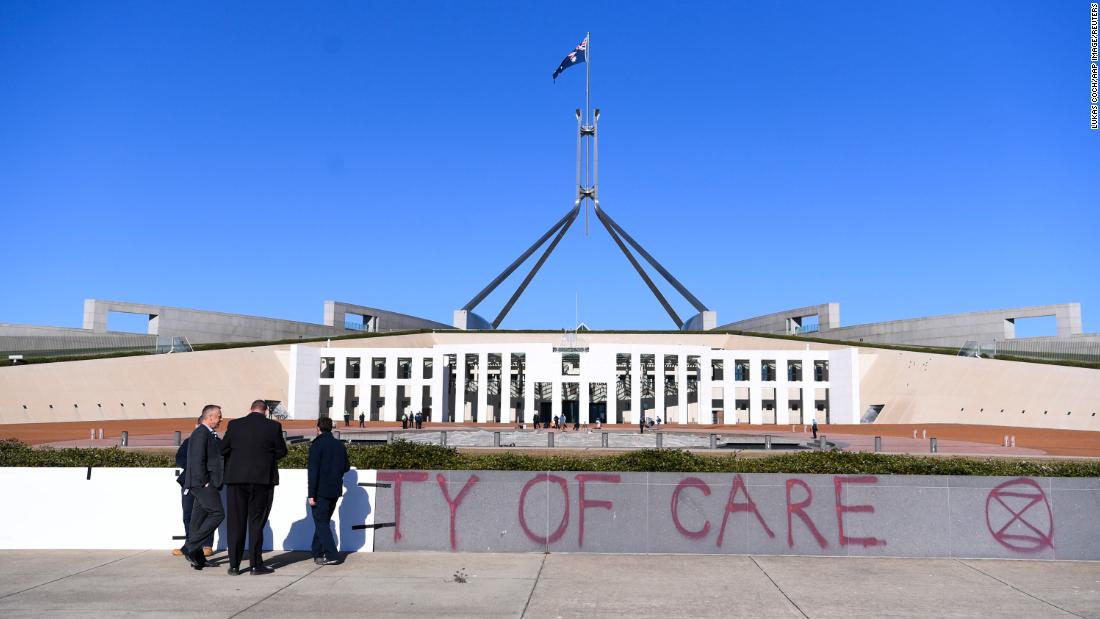 (CNN)Australia's Parliament House and the Prime Minister's residence were vandalized on Tuesday morning with messages accusing the government of not doing enough to protect the country from the catastrophic effects of the climate crisis.

Photos from the Australian capital of Canberra showed the message "duty of care" and the logo of the Extinction Rebellion protest movement spray-painted across the entrance to Parliament House and on the walls of the Lodge, the official residence of Prime Minister Scott Morrison.

Extinction Rebellion is a protest group which advocates public disobedience and demonstrations to raise awareness of the climate crisis.

According to a statement from the Australian Capital Territory police, eight people were arrested for property damage on Tuesday morning near the two buildings, some of whom had also glued themselves to the ground and set a baby pram on fire.

It came after the release of a new report by the United Nations' Intergovernmental Panel on Climate Change which showed the world had warmed by 1.1 degrees Celsius compared to pre-industrial levels and was on track to hit 1.5 degrees.

The report concluded it is "unequivocal" that humans have caused the climate crisis and confirms that "widespread and rapid changes" have already occurred, some of them irreversibly. Only by making deep cuts to greenhouse gas emissions, while also removing carbon dioxide from the atmosphere, can the world halt the precipitous trend.

According to the report, Australia in particular can expect with a high confidence to see increased fire weather across the country, as well as droughts and a higher number of cyclones in the country's northeast.